Media Councils in the Digital Age

When journalists are called the fourth power and are playing a public watchdog role, who is making sure that journalists and media organisations adhere to their standards and ethics and who watches over these standards without endangering freedom of the press? With the digital transformation in the media and the widespread of disinformation, media self-regulatory framework plays an ever-important role in upholding standards in journalism while preventing state intervention through media regulations to stifle media freedom.

The European Federation of Journalists (EFJ) , six European press councils and academics of two universities , created a consortium to launch the project “Media Councils in the Digital Age” with the aims to support the European models of media self-regulation through a network of press councils – the Alliance of Independent Press Councils of Europe (AIPCE).

The project will look at the digital challenges through four main works: academic research to provide data and analysis on the practice of existing press councils, awareness campaigns to promote media self-regulation, visibility and exchanges of media councils’ works on the international scene and strengthening of weak organisations including providing financial support to future press councils.

This is a pilot project partly funded by the European Commission (DG CONNET) and implemented by the EFJ together with the press councils in Austria (OP), Germany (TDP), Ireland (PCI), Belgium (RVDJ and CDJ), Finland (JSN) and the Universities in Belgium (ULB) and Spain (FB).

The Media Councils Debates.
Facing the Challenges of the Digital Age

MEDIA COUNCILS ARE FIT FOR THE DIGITAL AGE

Taken by their daily work, media and press councils rarely have the opportunity to reflect on their role, organisation, and future. For the second edition of the Media Councils in the Digital Age (MCDA) project, the French-speaking Belgian journalistic self-regulatory body (CDJ) decided to host the Media Councils Debates, a series of six webinars focusing on the transition of press and media councils towards the digital age. A new publication by the CDJ summarises these sessions, which helped to lay strong foundations for future dialogue between media councils and all stakeholders involved in the news media debate. 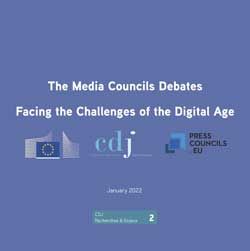